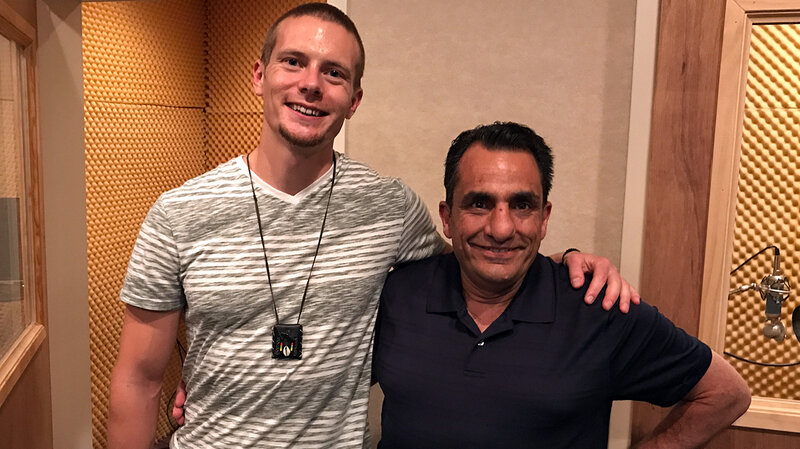 Russell Lehmann (left) and David Apkarian at their StoryCorps interview in Reno, Nev.

Air travel can be a stressful experience for all of us. But for Russell Lehmann, who has autism, a flight delay or cancellation isn't just a small inconvenience. Unexpected changes can cause him to have panic attacks — or worse.

That's what happened when Russell was trying to catch a flight from Reno, Nev., to Cincinnati in June that got delayed.

"I remember sitting in the same exact spot for seven hours crying and not one person approached me. Not one person made eye contact with me," Russell, 29, says in a StoryCorps conversation. "The next day, once again, my flight was delayed, and that's when I found an empty ticket counter. I sat behind it and I started sweating bullets, rocking back and forth, hyperventilating. I hadn't had an episode like that probably since I was like 11."

That's when David Apkarian, an airline employee, walked up.

"You were sitting on the floor, and you looked really upset. Do you remember what I first said?" David, 49, tells Russell at StoryCorps.

"I don't remember a whole lot, 'cause for me, in the midst of a meltdown, my brain literally feels like it's on fire, with a vise grip around it, just getting tighter and tighter," Russell says. "I have a hard time comprehending the simplest sentences. I just feel like I'm on a planet all by myself."

Then David crouched beside him and asked him what was going on, he says, meant the world. "I didn't feel as fragile. I had someone on my team," he says.

David says he let the crew know Russell was uneasy about getting on the flight, and he brought the captain over to him in hopes of giving him a boost of confidence.

"That's when I made up my mind, 'Yeah, I'm getting on this plane,' " Russell says. "You walked me onto the flight. I was able to board before anybody else to get situated and just kind of have some peace."

Russell asks David if he wondered what happened to him after he boarded.

"It's actually funny you should ask that. You know, I have access to our computer system at home, and I followed you," he says. "I saw that second flight did have a little bit of a delay, but it showed that you had stayed on board and got through. I was very happy about that."

"You didn't really know much about autism that day in the airport, but you connected on a human level," Russell says.

And that, he tells David, changed his life.

"Knowing that since this was such a difficult meltdown — and one of the worst I've ever had — that since I got through that, I can pretty much get through anything," he says.

For daily inspiration, outreach updates, and to join a growing autism awareness network follow Russell on any of his social media platforms!